Another trend, popular in West L.A. and DTLA, as well as other creative centers across the country is Space Sharing. Networks, mobile computing and particularly start-up finance, has made sharing office and desk ubiquitous. Many innovative industries share common production resources like equipment, processes, and costly tenant improvements in Maker Spaces. (see New Industries post). While normally more expensive on a square foot basis, the total cost of rent, on a demand and hedged basis, is much less. Compatibility, or in the Space Sharing vernacular, curation, is an essential factor easily overlooked. Having a common bond or a similar industry cluster increases the likelihood of success. The drawing below is of the LaKretz Innovation Campus in Downtown Los Angeles, a 65,000 square foot space that can be easily adapted for the changing needs of multiple occupants. 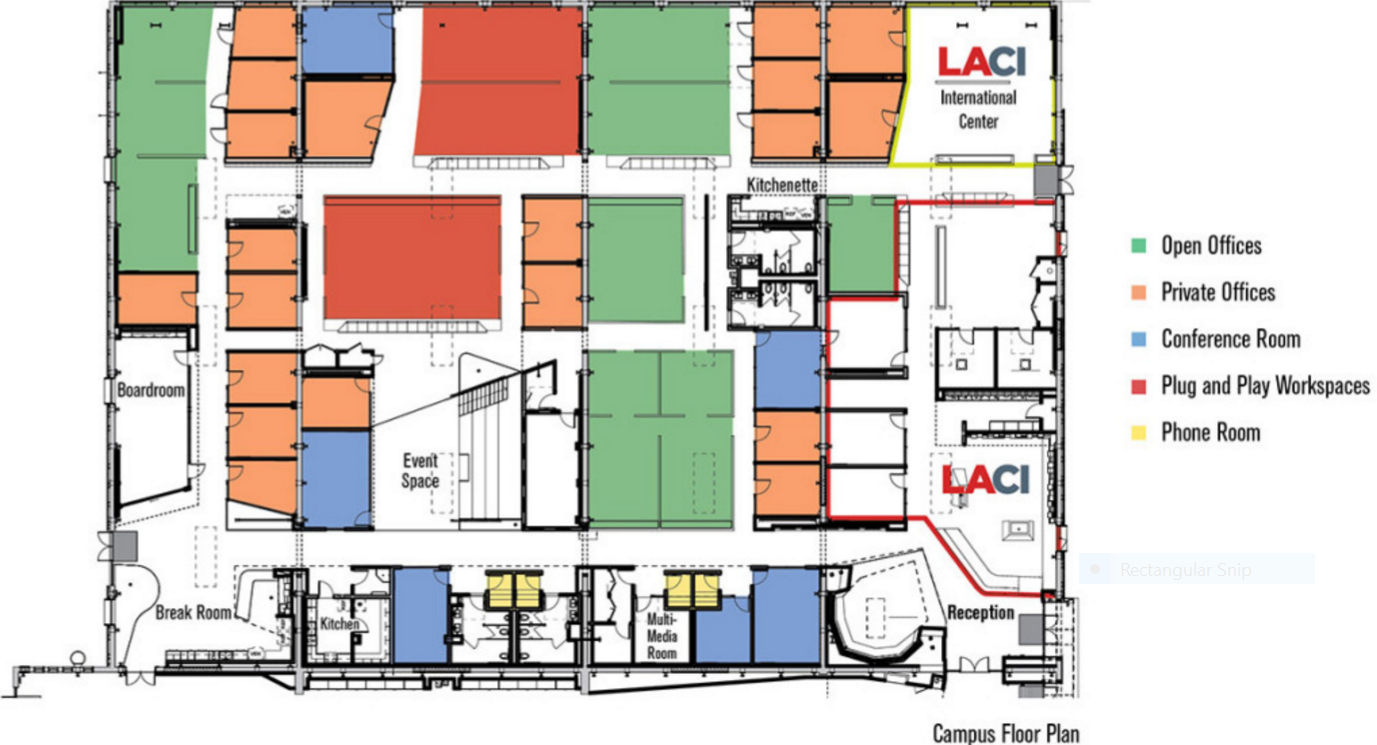 Warehouse Sharing is quickly evolving into a new product type managed and financed much differently than other industrial. The most common way to share, and always a very viable development model, is cutting up a large building into several parallel units with either demising walls or fencing. Different today is the advent of very high ceilings (32’ to 40’) that makes cube height a significant source of profits. Often the top 10’ is difficult and expensive to access and goes to waste. However, many businesses have a very profitable model of renting from developers by the square foot and charging their customers on the cube. The best examples are 3PLs that charge by the pallet and storage companies that charge by the storage crate. No one takes advantage of atomizing the warehouse like Amazon. Using a web server model, Amazon sells bits of storage to their fulfillment customers at multiples of 10 to 20 times market rents depending on the season. New technologies particularly robotics and space sensors will allow for different variants of warehouse sharing. These applications will increase building returns by allowing warehouses to operate on a “demand” model offering Occupiers complete flexibility at lower overall costs.

Why share a building when you can occupy your own? Because space costs can be cut in half by buying into a bigger building. Industrial building economies are greatly influenced by scale. Bigger buildings cost 50% less to build than smaller buildings. In addition, taller ceilings and more loading doors per square foot provides the more utility and lower cost per square (or cube) foot. It allows for hedging space needs to expand and contract at will. Other tenants can be brought in to make empty space profitable.

How will the financing work? One way is to pool four or five Occupiers together. They put 30% down and get an insurance company loan at the lowest interest rate possible. The building is run and syndicated like a partnership. There is an internal mechanism set up to allow for space sharing or to take in outside tenants. If at any time one of the partners cannot maintain their obligation, their equity position can be sold under certain conditions. Otherwise it is forfeited.

Similar arrangements can be made with one purchasing entity who brings in other Occupiers to pay the rent. Large Developer/Investors will get in the act because of potential profits. At first the majority of the space will be occupied in a traditional manner – one tenant per section. But as the overhead is covered, more portions of the space can be atomized to increase return multiples. No matter how the financing works, robust pre-leasing, marketing and data science will be needed to make sure there are plenty of paying tenants. Large Occupiers for big chunks of space. Smaller internet resellers for racked space.

But the most logical way to finance a sharing deal is to accept higher rent for shorter and more flexible space terms. This entices more investors to come in for higher returns. In return, the risk is reduced because you have a pool of different credits and space terms which reduces risk because of a diversified tenant base. In essence, the owners are collecting more rent for less risk operating a sharing building. Debt would be covered by fixed, minimum lease terms. Profits come in the form of the so-called value-add part that sharing contributes.

The technology at hand, including robots, automation, sensors, clear heights, autonomous vehicles, and drones are revolutionizing industrial real estate. In the “on demand” world, paying for use is a better model than owning. At the same time new investment entities are forming to finance and develop Warehouse Sharing Buildings. In this world bigger is better and investments of $50MM to $100MM will be typical for large distribution buildings. Smaller investors will do the same in infill markets capturing the last mile and creative production uses. The key to both is increasing building net income by offering a mix of long-term and “on demand” occupancy.