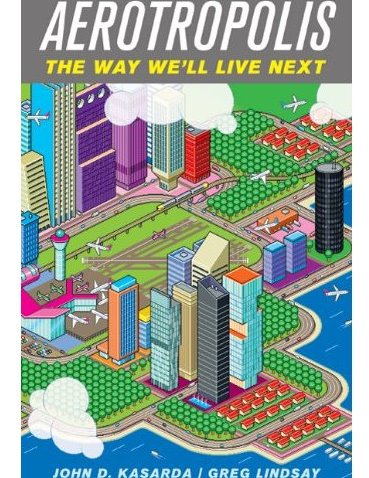 Aerotropolis – The Way We’ll Live Next

This is a timely book for my colleagues in the industrial real estate and development business. While many of us are mired in the local transactional blahs, Aerotropolis gives a vision of where the industry is headed both from the standpoint of industrial process and development.

At the simplest, air transport is the starting point for regional and industrial development that also includes hotels, offices, residential, manufacturing and distribution. the aerotropolis is a total environment that caters to a society that needs to be somewhere immediately. This “need it now” attitude propels the way business and executives view their location decisions.

The authors look into many details surrounding the development of airport communities. Early chapters look carefully at the FEDEX and UPS models where they have created the hub approach to package delivery. As important, many companies have reshaped themselves as they piggyback onto to major distribution hubs. This in turn has created new communities as they serve large industries dependent on an airport location.

Moving away from process and into regional development, the book looks carefully at Dubai as a gateway to the Middle East and Africa. Dubai is not just glitzy buildings, but is trying to be the open, entrepreneurial hub of a much larger region using its greater airport infrastructure to serve a much broader region. China too, especially in the Pearl River Delta has relied on its airport developments to speed goods to their export markets. But the future of its Aerotropoli development is to build 500 new airports to expand the concept of airport cities throughout the interior of the country. The same development model applies to India and as described in detail, New Songdo in South Korea. In every instance, the airport is the major building block for regional development and global competition.

The excitement and potential for global Aerotropli is a sad contrast to the demise of similar plans here in Los Angeles and El Toro. Both growth plans were crushed by nimbyism. At the one hand, the authors point to the great economic impact of airport development and expansion. However the reality, here at home, is that we may have already reached our maximum potential and will need to look to Las Vegas, Phoenix, or Denver to find the future of the aerotropilis in the Western United States.

As for transactions, I can picture a marketplace not much different than ICSC where new airport developments worldwide are born with a set of plans and competing interest from commercial, residential, and industrial developers, many with tenants in tow. You will the same players who share the aerotroplis vision not much different than the retailers who contributed to the enclosed retail mall boom of the 70’s and 80’s. One obvious group will be the trucking and freight companies who will want to be at every industrial and consumer gateway.

For those readers who frequently travel or are already in global industry, much of the material will not be new. But the concept and the scope of Aerotroplis is groundbreaking, especially in contrast to the lack of visionary development plans for our own country. Also, to see the concepts of Professor Kasarda come to fruition so comprehensively will give the real estate and business community a new perspective for future development.