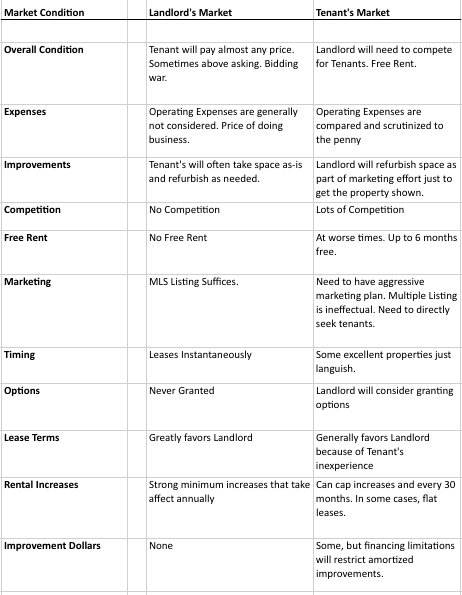 The market has shifted and building owners can’t act like they are solely in control. It’s not that vacancies are so high, but business expansion and leasing activity has reduced to a crawl. Many tenants want to stay put and extend their leases until business comes back. Smart landlords are willing to grant these short term extensions rather than have an empty building.

The fervor to purchase has long subsided except for those who are looking for the deal of the century. Container volumes from the ports are no longer growing. Manufacturing is stuck in a morass. Many space users in the apparel and furniture industry are wary of the twin concerns of low consumer spending and the crackdown on undocumented workers. Contractors and building material companies are not finding customers. These are some of the factors that explain the slow leasing activity in industrial Los Angeles.

Up until recently it has been such a bullish Landlord’s market that many owners have forgotten what it takes to make a deal. Many are stuck in uncompetitive positions because of high financing costs and fixed operating expenses. Some big owners have long relished their place at the top of the pyramid but are quietly talking about slow paying tenants and working with weak credit tenants. In terms of carrying vacant buildings, the cost is all on the Landlord, so tenants can take plenty of time looking for that right situation. Absorption is the owner’s primary concern. Even valuable option rights may be granted under the right circumstance.

Since leasing conditions will weaken as the financial crisis plays out, more landlord concessions are on the way. More “B and “C” buildings will become vacant as tenants gravitate to newer buildings. But tenants should be careful about getting more building than they need in terms of loading doors, ceiling heights, and yard requirements. Eventually leasing costs will catch up either by automatic rental increases or a returning market. Now will be a good time to use lease comparison software to make sense of different alternatives.

Landlords will need to do more to keep tenants happy and attract new ones. Many have seen this cycle before and are well positioned to offer the necessary incentives to rent their buildings. Most owners can quickly calculate what it costs to keep an empty building and this can add up to a nice allowance for a worthy tenant. One area that will be more difficult than past recessionary times will be the amortization of additional improvements. Sources to borrow these funds are hard to find and that will be a non-negotiable item in our credit impaired times.

The Landlord business will shift to management, tenant retention, and lease negotiation. There will be less emphasis on scouring the market for deals as there has been over the past several years. Owners with superior personal skills and buildings with unique characteristics will be meaningful as intangibles contribute to leasing decisions. We’ll soon see who are the true real estate experts.

Posted in Brokerage | Edit | No Comments »

The City of Los Angeles released their extremely thorough report regarding industrial land. They discovered that much of the industrial land is disappearing to other uses and the goal is preserve what little is left. The new study focuses on Downtown, West Los Angeles and Hollywood. Except for selected pockets, residential development will be strongly discouraged. From the city’s perspective, industrial land is the source of good employment, tax revenues, and the possible location for new green industries. It’s hard to argue that preserving industrial land is not important.

However, many people are extremely angry including property owners, developers and City Council members who represent the impacted districts. In many instances, burgeoning communities, in formerly blighted areas, will be thwarted by these policies. The City points out that land speculation in these industrial areas has been rampant with developers gambling that they will be able to obtain lucrative zone changes to build housing. This has made it unaffordable for industrial tenants to locate in these industrial areas. The new directive will establish firm guidelines to correct the loss of industrial property. Or will it?

The City is a large island in the sea of Southern California. When industrial users look for locations, they normally don’t single out a particular city, but will consider several areas. While vacancies are currently tight, space availability is cyclical and I expect to see more empty buildings as the probable recession mounts. In addition, there is a natural industrial flow where production with higher valued inputs stays local, and companies that search for a lower cost position move to the periphery or overseas. When examining the specific industrial locations the City has identified I can see their concern, but business will find a perfectly good building to occupy in the region.

One alternative is to allow development in the controversial areas and use the new tax revenue to improve the 270 acre Goodyear Tract that is in dire condition. Annexation of such County areas as East L.A., which contains another awful industrial area, can use considerable investment. The City of L.A. could launch a competing offer than the incorporation that is presently proposed. Local companies will fight the additional business costs, but if property values rise and industrial companies can switch to more dependable electricity from DWP, that will assuage many concerns.

The new land use policies look rather draconian because of how blocks of industrial are being differentiated, especially when many of the new projects are offering real improvement and lifestyles that are in keeping with the post-industrial future. The saddest thing about the land use policy is if the conjunction of Little Tokyo, the Arts District, light rail development, the Los Angeles River and new entertainment centers is damaged.

Planning and CRA have presented this plan as a fait accompli. City Council persons and moneyed real estate interests are not happy. It almost seems that the preservation of industrial land is a lot like the argument that was used to keep auto and steel jobs in the U.S. Based on that, I’m betting on development. You can form your own opinion, http://cityplanning.lacity.org/ .

(The above map from the City Report)